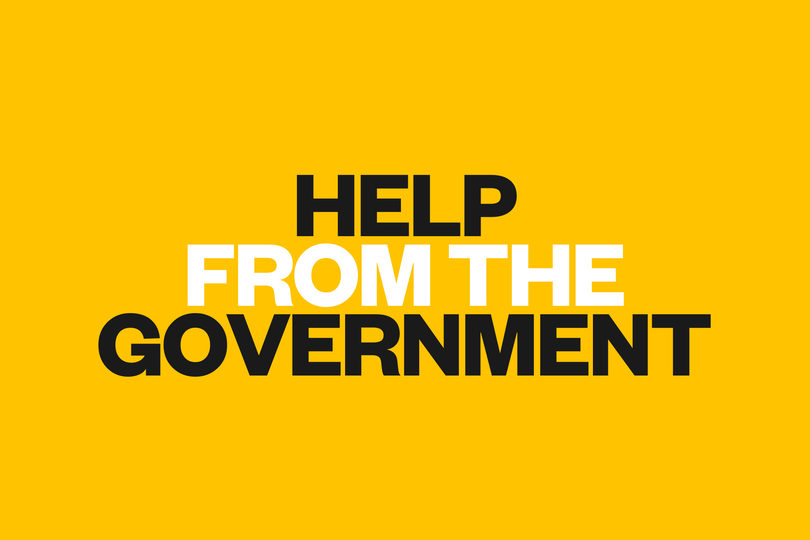 The rising cost of energy continues to be headline news. We’re very aware of the impact this is having on customers, and have provided updates in previous blogs on why prices began to rise last September, an update on support available to customers in January, and further information following Russia’s invasion of Ukraine in February.

We want to reassure our customers that we’re doing our best to keep energy bills as low as possible, absorbing as much of these rising costs as we can, and pointing customers to where they can get additional support. This has driven many suppliers out of business, but we want to repeat the reassurance we gave in December that we’re not going anywhere.

Please note, you don't need to get in touch with us about this assistance.

What new Government support is available?

While the April price cap rise of almost £700 per year was a huge bill shock for customers, Ofgem have estimated that the price cap will need to increase by an additional £800 per year in October when it is next reviewed to account for continued price volatility. This prompted the Government to announce a new range of measures at the end of May designed to support bill payers heading into the winter, paid for by an “Energy Profits Levy” on oil and gas production firms.

We have been consistently calling for the Government to provide additional customer support, so we were pleased to see the package of measures published. We will continue campaigning for a fairer energy market and will share further detail on our blog on what more is needed to support customers over the medium and long term.

In the meantime, May’s announcement on short-term support measures will impact every household in the UK, so we have summarised them below. More information can also be found on the Government website. You do not need to contact us for these payments, they will come directly from the Government.

·   £400 for all households. Every domestic electricity customer will receive a one-off £400 payment in October. Direct Debit and credit customers will have the money credited to their account, while pre-payment meter customers will have the money applied to their meter or paid via a voucher. This has superseded the £200 bill support package announced earlier this year which would have also been applied this October and then recovered through higher bills in future years. As well as doubling the amount given, this new payment will now be made as a grant with no pay back required.

·   £650 extra for those on means tested benefits. More than 8 million households on means-tested benefits will receive a one-off payment totalling £650, over two instalments - one in July and one in the autumn. All households receiving Universal Credit, Jobseekers Allowance, Employment and Support Allowance, Income Support, Working Tax Credit, Child Tax Credit, and Pension Credit will receive the tax-free payment direct to their bank account.

To understand how this package could benefit you, the below Government analysis details how each support measure will impact households by net income. This shows that the average UK household will receive just over £800 in support between now and the end of the year. 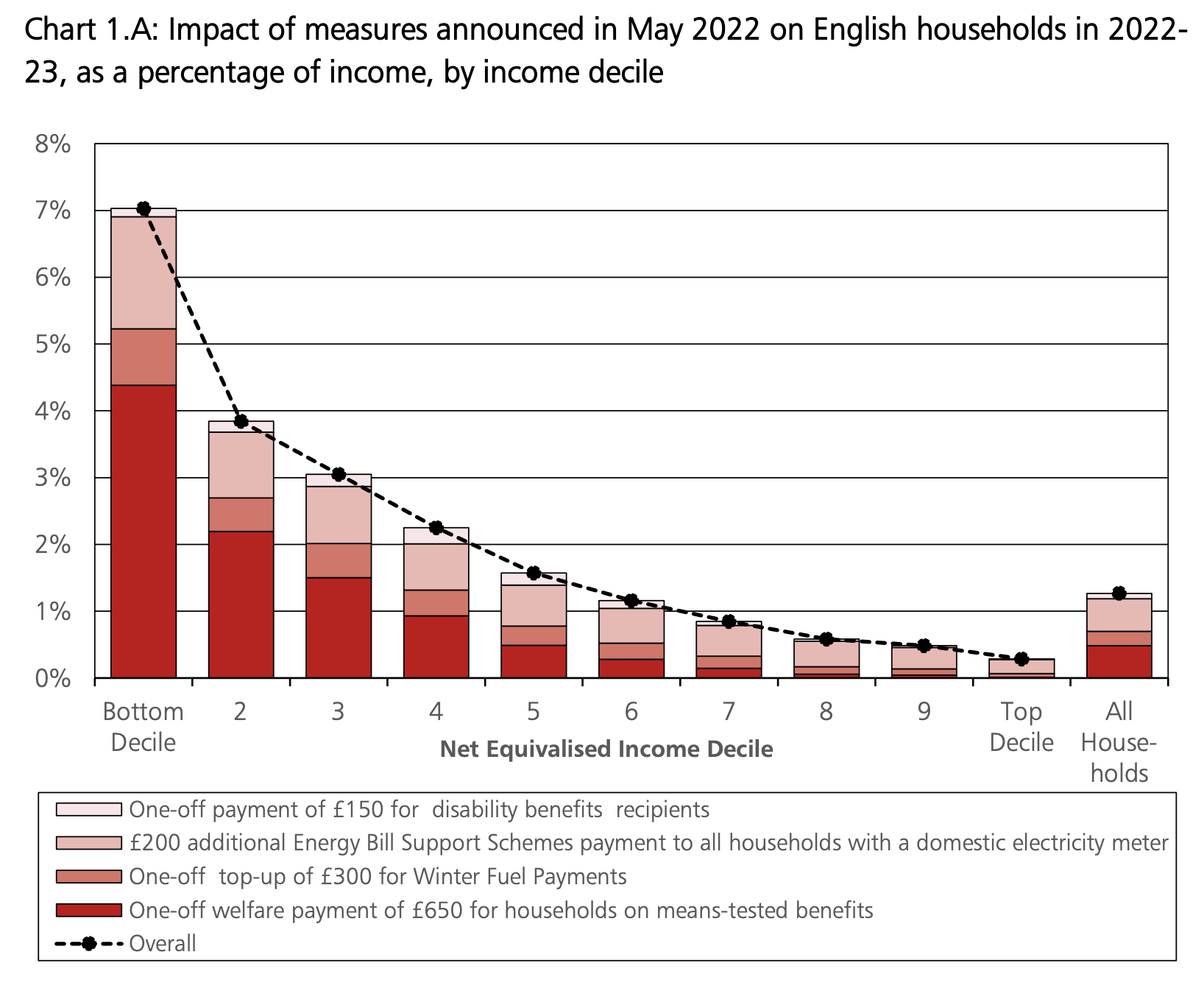 Source: “Illustrative analysis of the impact of the May 2022 Cost of Living Support package and February 2022 Energy Support package on households”, HM Treasury, May 2022, p6

Since the crisis began last Autumn, we’ve been calling on the Government and the energy regulator Ofgem to do more to support customers through this period. We have helped feed into policy development through attending industry-wide roundtables and have secured meetings with key officials and Ministers.

In March our Co-Founder Simon Oscroft also gave evidence to a Parliamentary Committee who are scrutinising the Government’s response to the crisis, where he called for more financial support for customers.

Later that month So Energy also held a drop-in event for all MPs in Parliament alongside energy trade body Energy UK and a range of consumer groups and charities including Citizens Advice and Age UK. The Energy Minister Greg Hands also spoke at the event. This was designed to brief MPs on why energy prices were rising, what further Government action was needed, and how they could help their constituents. 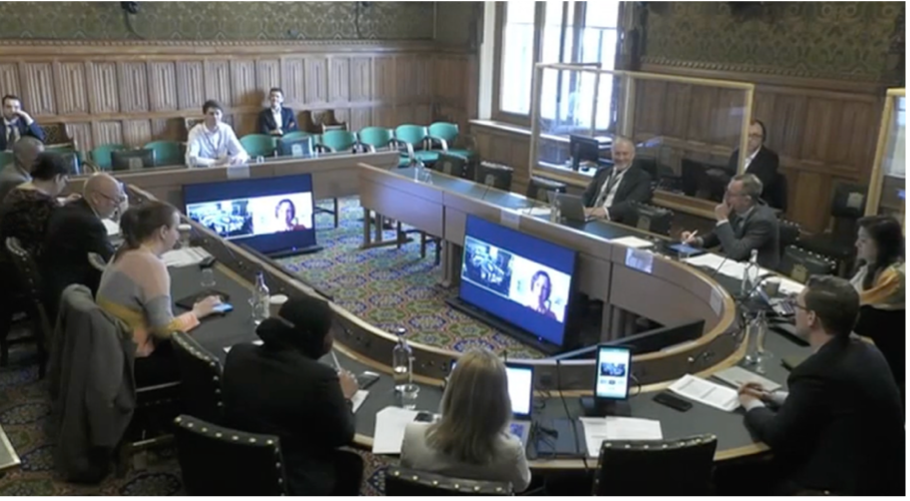 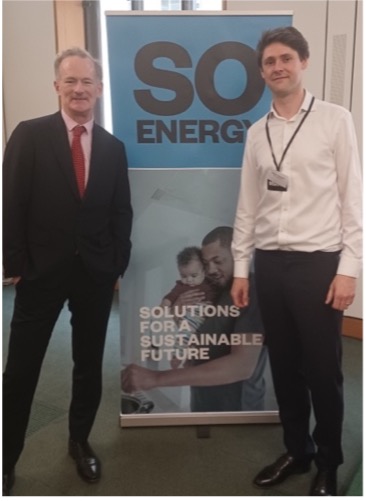